How I Found my Husband and Learnt to Love Iced Coffee!

As a girl growing up in Montana, I was used to brutally cold winters and mild summers. Snow, sleet, and shoveling the driveway were the kind of stuff I was used to.

When I graduated high school, my life changed a lot. I didn’t get into the college I had wanted but I did get accepted into The University of Miami. So I had a choice to make… stay at home and take a different path in life or move down to Miami and pursue my college dreams.

I put off the decision for weeks. I didn’t want to leave my family and my friends behind, but I had always dreamt of becoming a lawyer and I needed college for that… what was I to do?!

One day, I was talking to my Grandma about something else entirely and the topic of school came up and she said something to me I’ll never forget. She said “Honey, you can’t have any regrets in life. No matter how scary or how unsure of something you are… you’re better off giving it a go. When you get to my age, you realize that it’s the stuff you wish you had done that haunts you the most!”

It hit me she was absolutely right. I knew what I wanted to do and I said to her “You’re right Grandma. What’s the worst that could happen?” and added “I’m going to give it a go. No regrets”

I went right home, filled in the online form to accept my position, and started planning for the big move down to Miami.

My first week in Miami was an eye-opener. I arrived in August and the heat was like nothing I had ever felt before. Dripping with sweat, I moved my stuff into my dorm.

I was so disheveled that one of the other girls stopped me and said “Are you ok? You look like you’ve been for a swim!” to which I laughed and replied “Is it always this hot?! I’m exhausted already” and she said “Hot?… Today’s a pretty mild day to be honest. It should heat up a lot more later!” and I said “Oh lord!”

After moving all day I was utterly exhausted. I sat down at the end of my bed in a heap and laid my head down for a nap but just as my eyes closed I heard a voice say “Hiiiiiiiiii!! Welcome to the University of Miami!!!”

My eyes jolted open and I angrily said “What do you want?!?!” but then as my eyes focused I saw the absolute man of my dreams. He looked like a movie star with perfect skin, an amazing smile, and sparkling blue eyes.

I stuttered a bit and said “i i’m sorry… I literally just laid down to have a nap when you said hi” and he laughed and said “That’s ok, I just thought you looked like you could use a coffee and i was about to go down to make a batch of iced coffee… would you like to come?”

I was a bit flustered. I’d never even seen a guy like him, let alone had one offer to make me a coffee. I said “oh, sure… I don’t really drink Iced Coffee, but I’ll take a regular coffee!”

He grabbed my hand and said “Come on! Let’s go grab one!” and he led me downstairs to the common area where there were a whole bunch of other people hanging out and getting to know each other. 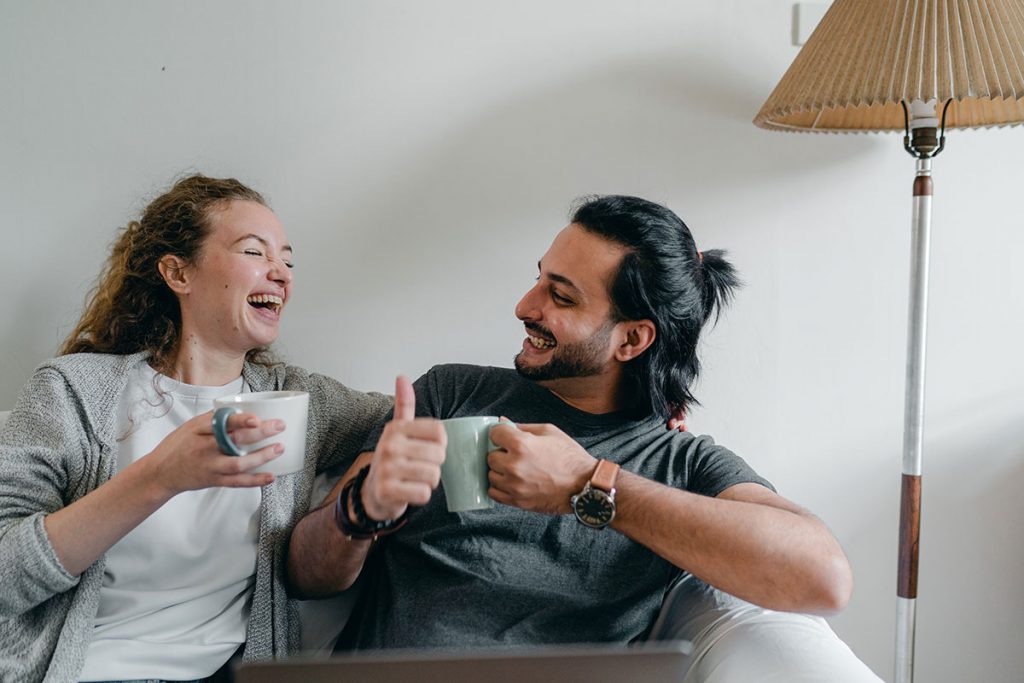 The odd one out

When we got to the front of the line to use the kitchen he said to me “Now, you’re sure you don’t want to try an iced coffee?” then added, “I promise, it’s delicious!”

I looked around and literally, everybody else in the room was drinking an iced coffee. Nobody had a mug of coffee. I was quite embarrassed but I’d never tried iced coffee before. I said “Well, where I’m from, coffee has always been designed to warm me up. It gets cold as hell so Iced coffee isn’t really a thing!”

He looked at me puzzled and said “Well, you’re in Miami now… give it a shot” and then he leant right over and whispered in my ear “I promise, you won’t regret it” the hair on the back of my neck stood up as I was so excited by the whole situation. Not so much the coffee… but the whispering in the ear.

He got some ice cubes out of the fridge, turned the machine on, and proceeded to make me an iced coffee.

To be honest, beyond the ice, I couldn’t take much notice as I was fixated on his bulging arms and his beautiful hair… so when I snapped out of it again he said “Here you go. Try this out!”

I grabbed the glass and it was icy cold. Condensation was gathered all over the outside of the glass which made it wet and kind of woke me up from my tired state all on its own.

I raised the glass to my lips and took a sip… just as I was savoring the flavour with my eyes closed I felt something touch my lip and he said to me “You’ve got coffee on your top lip” as he wiped it clean for me and then he added, “So, how is it?”

What the hell was happening here? On the first day at college, the first person I met was a beautiful, helpful, genuine man who had just introduced me to the most delicious drink I’d ever tasted in my life.

I paused for a second and then said to him “The coffee is beautiful. Where is this from?” and he said to me “Uhmmm not sure” as he picked up the box next the machine then said “Angelino’s Coffee by the looks of it”

I looked at him and said the cheesiest thing to ever come out of my mouth in my entire life “Well, that makes sense that it’s Angelino’s given you seem to be some sort of Angel!”

He smiled cheekily at me and I smiled back at him innocently… like my Grandma had said to me. No regrets!

That was 9 years ago and today that man is my husband and not only is it the day I met him but also the day I learned to love iced coffee.

I rate Angelino's Coffee 4.5 out of 5 stars & recommend trying the experience pack out first.